The air tastes of smoke; crisp days heralding burnt hickory. The mountain is bombarded by its acne, orange pimples on cretaceous rock, preparing to spread once fall is no longer in doubt. The sun has finished its shift—five months on followed by six off—and is taken a well-deserved respite; I hear it escaped down to Florida, ready to spend its vacation wallowing in mud and watching cars pull into The Breakers. “A baby blue Bentley—that’s got to be MJ!”

“His money’s too new and his skin’s too dark for a place like that,” the humidity responds. “Sorry hon, it’s just some old billionaire that considers himself a Dandy.” It’s right, as it always is. That’s the reason it’s so overbearing, why spending too much time around it makes it hard to breathe. It’s what provides its air of inescapability.

Back in Montreal, the moon is taking advantage of an otherwise empty workplace to log some overtime and claim more responsibility. At first it’s worried about being berated, and still waits until seven to show. But as it gets more comfortable, it’ll expand its range until the afternoon is solidly in his purview. You start to feel like you’re in a noir film, existing permanently in the time between when the city wakes up and when its people do, that period when the stores are opening and the metro is half blue-collar workers and half trust-fund clubbers. Or maybe the darkness is more gothic than noir; it refuses to clarify itself. The supermarkets and busses become beacons of light, people going about their business within as they throw reflections onto the rain-slicked streets. It all carries the Schein of Hopper’s Automat, giving the feeling that you’re getting a glimpse into another world, that of the nightdwellers. It’s intoxicating, promising the ecstasy of a new life, except you never truly experience it. No wonder seasonable depression is universal here; when the sun does drag itself into work, it’s only for a few hours, and the rest of the time you feel like an outsider, sitting in darkness observing the lives of others as if you were at the cinema. 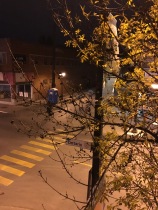 The next day, I go on a walk. Or, rather, I try to. But every smell, every site, every sensation—even just the feel of the breeze—carries with it dozens of memories, turning into signifiers overloaded with referents. I look at Mt. Royal from a distance, and for a millisecond I’m looking at the Black Forest as I wander through Baden-Baden, about to eat breakfast in a room colored a shade of pink so soft that only long-dead royalty would dare use it. But before I can actually remember any of this, the thing—Mt. Royal—pushes back, asserting itself in my vision, loudly insisting on its reality.

Clouds drift across the sky, covering for the sun’s early escape. And suddenly it is October and I’m visiting my sister during her time studying abroad in Ireland. I feel the wet air push across my face, the Irish Sea carried inland. I try to recall a memory of that trip—walking across a Gallway beach or wandering around the tall grass of a Dublin golf course, but doing so chases the experience away, replacing it with an empty thought, one that leaves me unfulfilled. It’s not even just memories of other autumns that overwhelm me. The hickory smoke returns, and I suddenly am in a Colorado winter. But again, when I try to identify the memory provoked, it dissipates into nothingness, the feeling of ecstasy in my chest subsiding, leaving me with an ordinary thought. I try and call back the reverie, but it is gone, lost for good. 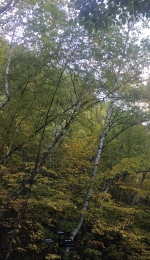 It must be the light, how the sun filters through the atmosphere here, defusing on the way down. Nothing seems to take priority, with the background and foreground merging into one another; the shadows all seem lighter, less secretive. It’s the same soft light found in memories, what gives them their airiness and makes them ungraspable. Berlin has the same light. At least I believe it does. It’s been a while since I’ve been, and there’s always the worry that memory light and remembered light have merged. Flipping through my notebook, I find vindication—a note from the time about the city’s bizarre sun, how it gives every corner a cinematic aura. I’ve arrived at Mt. Royal, finally, but it’s suddenly a park in Pankow, a Berlin suburb. I’m unmoored and disoriented, floating free of space and time. My heart pounds and my breath catches, promising an almost manic joy, but it slips away and I realize that ecstasy is never in the present nor the original experience nor remembrance of it, but rather in its haunting, in those moments where you remember without thinking of the objects, freeing yourself of the materiality, because that’s what holds the guilt within memory; the recognition that in reality you were freezing your ass off simultaneously carries with it acknowledgement of the world’s pain and suffering, its violence and greed, the horror of happiness in a world as degraded and exploitative as our own. The empty reverie holds a memory that extends past your life, past history, a primordial echo of a time when we were one with nature, a point we can never return to but forever yearn for. Adorno once said that true happiness is promised in the childhood understanding of village names like Applesbachville and Wind’s Gap, a pleasure stemming from the promise of once again becoming united with the natural world, except it scrambles away when you arrive, giving you the feeling that you’re too close to the joy to experience it, the physicality of the location foreclosing access. The same thing happens with recollections; the more you remember, the farther the happiness you’re searching for drifts. But despite its escape, you are not disappointed, because you realize that in that memory there is an impulse toward joy, and that perhaps one day this moment will provide that same jolt, as ordinary as it may currently seem. And so I wander through the park, content to drift between weightless reveries and the anticipation of future happiness, haunted by something we’ll never know.