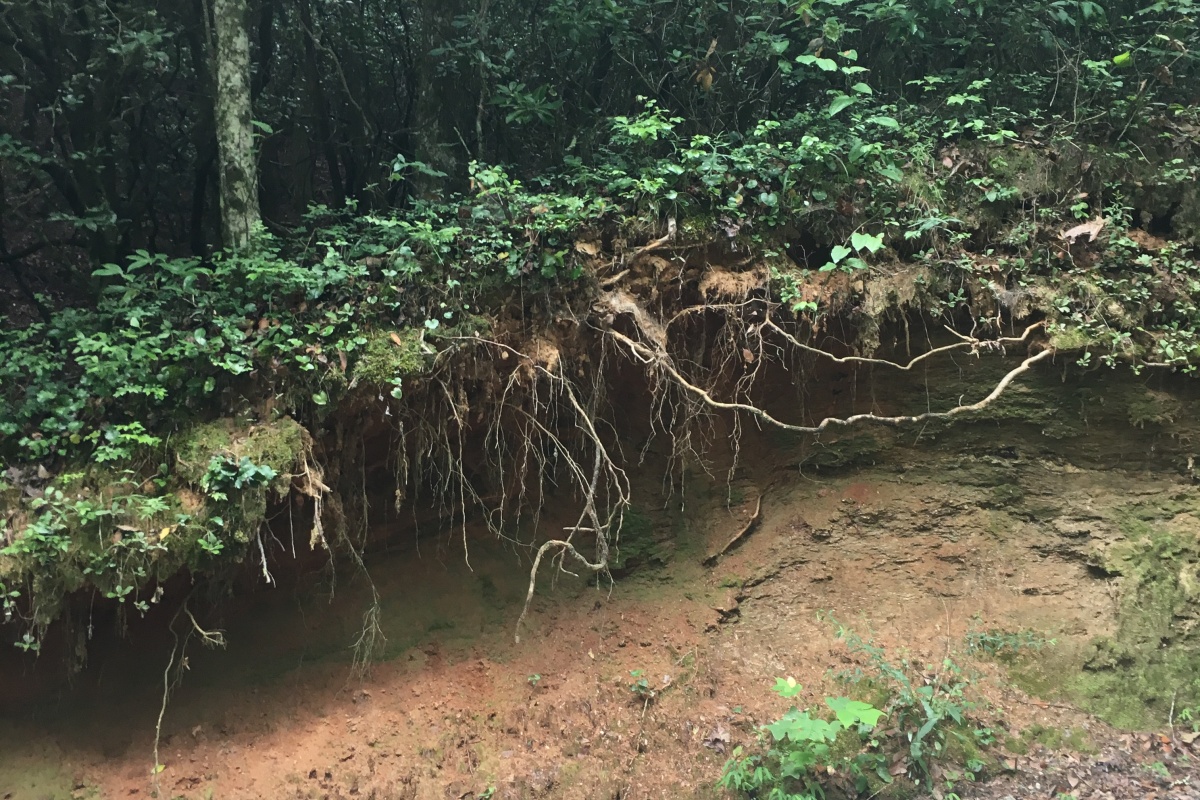 Apologies for not updating the blog in a while; if grad school does one thing, it’s make me a worse writer. Focusing on making sure each sentence is unimpeachable is a sure-fire way to ruin the whole. No matter. Over the course of the next few weeks, I will be uploading a mixture of old and new pieces.

At the moment, I am sitting on the patio of an Atlanta coffee shop, waiting for the rain to stop. Thirty minutes ago it was sunny and muggy, the clarity of the air belying its humidity. Fifty feet away, I can see the lines of rain, reminiscent of film grain, discontinuous droplets offering an illusion of consistency. They create a fog behind them, giving the feeling that we are not sitting below a cloud but rather in the nimbus itself, having floated upwards on a current of heat until the reconstructed gas surrounded us. Already, however, this is passing. The mixed-use apartments down the road are no longer desaturated and aged; their oppressive newness has returned. The thunder is less frequent and the air is cooler. But even once the rain concludes, there will still be occasional flashes of lightning, blinding those of us out here working on our computers. I know this because the rain has already stopped.

It was a classic Georgia thunderstorm, the type that exists in every Southerner’s childhood memory, the rain barreling in out of nowhere, catching you at a swimming hole or out in the middle of a field or on your bike, forcing you to race for cover even though you know it’s futile, having stayed out until the first drop fell, ignoring the various signs in an attempt to squeeze every last moment from those long, humid days. If it was August and finally hot enough, you’d excitedly watch steam rising off the asphalt, a science project in real time. You’d get soaked and then stand around, confident this too would pass, ready to reclaim your rightful place within the field of play. And you were almost always right; it would stop, and everyone took off their shirts, if they weren’t off already, and laid them to dry, though the moisture in the air made this a fools’ errand, and you’d go back to swimming or pitching or running around semi-aimlessly. The asphalt would’ve been cooled, allowing you to temporarily run on it without burning the bottoms of your feet, though usually by that time in the summer your sole would be so calloused that it didn’t matter much one way or the other.

Montreal, where I live now, doesn’t have much of any of this, despite the summer humidity. There are rain storms and rainy days and even the occasional bursting forth of thunder and lightning, the earth’s way of reminding us of its power, but in much fewer number than in the South. I hadn’t realized I missed them so until I returned, having forgotten how just sitting and watching the storm is an activity in itself, giving you a base from which your mind can drift. Perhaps the loss of familiarity is why the rain seems so much more common now than it was when I was young. It doesn’t help that my pre-adolescent years coincided with the worst drought Georgia had seen in five hundred years; a return to normal rainfall would naturally feel like an increase. But looking at Atlanta’s yearly precipitation for the months of June, July, and August (an admittedly poor metric for thunderstorms), something begins to emerge. The average for the data set I have is 13.02 inches over the three-month span. The average from ten years before the drought was 11.9 inches, while for ten years after was 14.4 inches. This brief analysis is obviously not scientific—the data set is too small, the periodization is arbitrary, etc. But it confirms my sense that summer rains in Atlanta are increasingly common. It also tracks roughly with a two-degree increase in average temperature over a similar period. It seems that climate change is set to produce more thunderstorms in Atlanta as our planet collapses.

There is another explanation, however, one that is intertwined with climate change but reveals it to be the symptom of our world, not the illness itself. A few years ago, a group of scientists found that Atlanta births thunderstorms like few other American cities, our concrete sprawl calling forth storms from the heavy air and sending them around the metro region. In the intervening years, the city has only gotten more myopic when it comes to development, various real estate moguls paving over the urban forest to build mixed-used monstrosities, as if the abundance of trees and outposts of nature weren’t what made the city so special. And so we can assume the rate at which Atlanta’s heat islands have created thunderstorms has increased as well. It’s a stark reminder that our insistence on dominating nature is inherently destructive, climate change or not.

And this is the crux of the issue. Even if we were to magically switch to a carbon-neutral system of construction, we still could not continue to build as we do and expect nothing to happen. The earliest inventions stemmed from self-preservation, a natural impulse, but worked through domination of the natural. But while for most of human history victory over nature was localized and tenuous—a rickety bridge, irrigation for a series of farms, perhaps the occasional dam or canal—The acceleration of technology over the past three hundred years has shifted so we no longer attempt to conquer aspects of nature but rather the entirety. It is downright suicidal to believe we can innovate our way of a mess caused by the conquering impulse inherent in inventiveness. Furthermore, no matter how much we wish to deny it, the natural is still within us. And so to destroy and dominate nature is to do the same to ourselves, even if we do not realize it.

It is now a new day, and I am sitting in a different coffeeshop. Though it is sunny out, the tables are still wet, carrying the marker of yesterday’s storm. Kids from a day camp run around on the grass in front, taking advantage of the ever-rarer blue skies. I check the weather radar. We’re surrounded; the rain will start by six, never to end.